Virginia Humanities Board Member Clark Hoyt lives in Great Falls, Virginia. He has had a long career in journalism, including as a Washington bureau chief for Knight Ridder, then the nation’s second-largest newspaper group, and later as public editor/ombudsman of The New York Times.

Recently, he sat down with Elliot Majerczyk in our radio studio to talk about the path that led him to Virginia Humanities and how his work as a journalist relates to the humanities.

Virginia in particular is such a rich place. There are so many streams that come together in this state to form a shared culture.

The humanities are about the stories, the combined stories about a culture that go to make up a culture.

I think the work of this foundation is terribly important so that people understand that we all have distinct identities and distinct histories, but they all blend together into a common story. 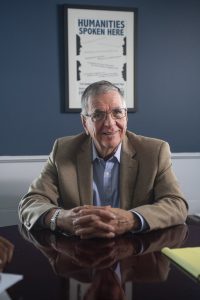 Clark Hoyt is a journalist who was the public editor of The New York Times (2007-2010). In 1973 he and fellow journalist Robert Boyd won a Pulitzer Prize for their coverage of the Democratic vice presidential nominee Thomas Eagleton.

Posted: January 9, 2020
More News
Get Virginia's history and culture delivered to your inbox.Sign up for our 2x monthly e-newsletter